We are now accepting reservations. If you are skiing June Mountain, advanced tickets required, book early for weekends. 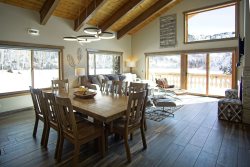 When does Tioga Pass open?

Usually Tioga pass opens in late May or June depending on snow removal and road repairs.  Check road conditions by calling 209-372-0200.  Push 1, Push 1 again for Tioga Pass/120 East.  Check out this page for the historical opening and closing

What is the name of the waterfall?
Horsetail Falls, aka Rush Creek Falls is a huge 270 foot water fall dropping down from Agnew Lake in the June Lake Loop area. In the spring the waterfall is amazing from the melting snow.

What is the first day of fishing season?
Last Saturday in April and starts at daybreak. You can purchase a fishing license from Ernie’s Tackle shop on main street.  Check out these free fishing days.

Will I get eaten by a bear?
Our Black Bears are predominately gentle creatures who are genetically programmed to run from humans.People are 350 times more likely to be struck directly on the head by a bolt of lightning than to be attacked by a black bear, Searles-our local bear expert points out. It's more dangerous to be walking down a city street than to experience an encounter with one of these animals.  There are no Grizzly Bears in the Sierra since 1924 when our state animal was offically listed as extinct.  Check out these bare facts about our local bears.

Where are the slot machines in June Lake?
During the 1930's in Mono County, the demand for gaming entertainment skyrocketed with the influx of hundreds of employees working on the Mono Basin Project. To accommodate the workers, many local bars and cafes installed slot machines. Although illegal, there use in Mono County thrived for many years until the completion of the aqueduct in 1941 and transfer of all workers.  It was rumored that the last slot machines were hastily dumped into June Lake in the middle of the night by local merchants in response to an imminent raid by the State Revenue Agents, however, the legend of the slot machines did not end there. Over the years, numerous attempts to locate them by special cold water dive teams failed so the rumors continue. The E Clampus Vitus Marker  is shaped like a slot machine and has belt buckles belonging to three deceased members of the Bodie Chapter of E Clampus Vitus showing on the slot reels. Location. 37° 47.95′ N, 119° 3.819′ W. Marker is in June Lake, California, in Mono County. Marker is at the intersection of Garbage Pit Road and June Lake Loop (California Route 158), on the left when traveling west on Garbage Pit Road.  Are you feeling lucky?

What is the oldest resort in June Lake?
Carson’s Camp was established by Roy Carson in 1916. The initial camp was in a tent “where fishing is always good”. In 1919 his wife Nancy became camp cook and housekeeper. The first building on this site, adjoining Alger Creek, was completed in 1920 and the main building was finished in 1921. This same building now serves as the Silver Creek Store.

Jump to a Rental